While Europe is talking about the need of strenghtening of local governance, in fact it’s not always possible to find a consensus between the authorities and the local communities.

The Polish city of Wroclaw (German: Breslau) is situated on the Oder River. It is referred as «Silesian Venice», as it has 12 islands and 112 bridges. At the end of the II World War, Wroclaw was badly damaged, and the tragic past of those military events is felt to this day in the torn landscape of the city. In the heart of the city there are several islands, one of which is called Vyspa Slodova.  Only two old buildings left on the island after the bombing, including the thirteenth-century St. Clare's Mills and an ancient and dilapedated mansion, Wyspa Slodowa, 7 (WS7). In the 70s, despite the protests of local residents, the authorities of Wroclaw ordered the demolition of the old mill, and since then only an old mansion remained on the island.

Modern Wroclaw is experiencing rapid gentrification. Several years ago, city activists appealed to its municipality to save WS7 building and make in it a social and cultural center for the residents of Wroclaw and thus prevent the construction of expensive modern housing in this place. Activists created a public group "Vyspa Slodova, 7" (WS7), which consists of several dozens of people.

First, there were public consultations on the fate of the building. Several other groups appeared at once, offering different options for the development of the project (among these groups there were a group of architects from Wrocław University of Technology, group of architects from BlokBlog, Wrocław's Waldorf School and a group that wanted to open pub in WS7 building). The community Vyspa Slodova, 7 continued to insist on the creation of a social and cultural center. In the summer of 2015 Wroclaw authorities announced that the mansion would not be sold to private investors and even claimed that they would make money for its restoration. They proposed the groups to create «participation laboratory»,  where all active local people could do working and create new ideas for public areas in Wroclaw. The old mansion became a symbol of changing Wroclaw...

These events took place on the eve of 2016, during which the city had the status of "European Capital of Culture" (ECC) and held a large number of cultural events, sponsored by European Union structures. Wroclaw authorities initiated the translation of the project under the aegis of this paneuropean event (the term «participation laboratory» was taken from the official application which won Wroclaw the status of ECC). Many of the members of "Vyspa Slodova, 7" group were critical about the project of ECC in the town. «Since that time the general idea of the ECC were changing dramatically and the authorities were more into doing the project in a very commercial way and without participation of plenty groups of citizens. These changes were critisized by experts from the European Comission. In this point its actually ironic they spoke about some big  participation laboratories and asked us to do it for them», says member of "Vyspa Slodova, 7" group Krzysztof Jarzab.

The ECC finished, however, no renovation of the WS7 was made and its opening for the city's residents did not happen. «The great, final accomplishment of the ECC is the fact that the WS7 building is going to be sold to a private company, which is going to enlarge it x3. So, the participatory dialogue finished just as it begun: we strongly protested against the decision. In may of 2017 the of Wroclaw authorities  officially put the building on sale. So the ECC was just a time the mayor had to wait to sell the building, and now tries to justify his decision, which does not make much sense, since he had promised not to sell the place», says Krzysztof Jarzab.

In order to get information from the other side of this dispute, we applied to the Public Communication Division of the Municipality of Wroclaw and received the following comment:

«After long process of public consultations and a competition for NGOs concerning the concept for developing the building that did not bring the resolution to the matter in question, municipality will announce another competition to gather offers from investors willing to renovate the building and ensure accessibility of its designated part for public purposes. The building will be sold and the land on which the building is located will be leased in the form of perpetual usufruct to ensure that the city has oversight of the way it is used. In the rules of the competition the city will specify the most important conditions concerning the use of the whole area. After selecting the administrator of the building the conclusions reached in the process of public consultations i.e. ensuring public use of the part of the WS7 building will be confirmed in relevant documents. The entire process of handing the building over is not about its privatization but about specifying the conditions if its use».

«It appears that the city authorities only did their best to appease the WS7 guys while Wroclaw was in the limelight of the European Capital Of Culture», says Gregor Gowans, editor of the local newspaper Wroclawuncut. «However now that this time has passed the temptation to sell the land for private use has just proved too much for the authorities. Over the years Wyspa Slodowa has been slowly undergoing gentrification, a process that is pushing out the beer-drinking students and attracting wealthy home-owners instead. The sale of the WS7 building  hoped to take over is just part of the equation here». 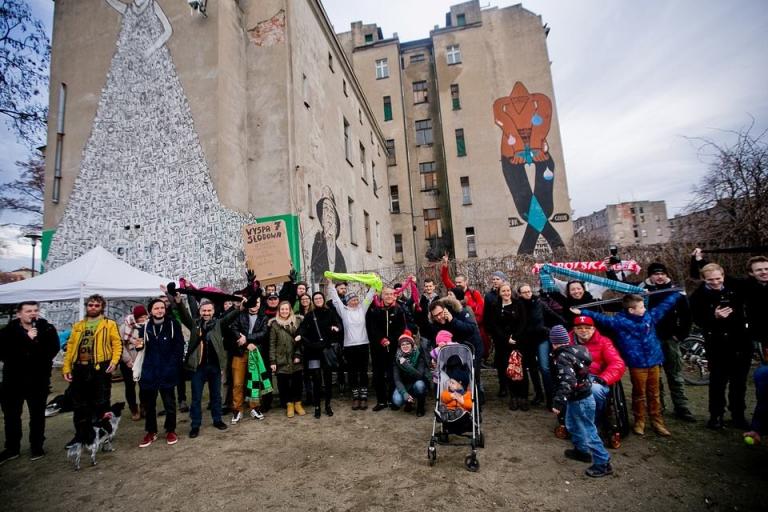