“Parallel” blog about women in music by Zhenya Nedosekina (Moscow)

In 2016, Zhenya Nedosekina started the blog "Parallel," which is devoted to female musicians in Russia and other post-Soviet countries.

Zhenya Nedosekina (artistic name: Jekka), 29, is a singer and electronic musician from Moscow. The idea for the blog "Parallel" arose as a kind of attempt to resolve a personal crisis that emerged a year ago. “I was feeling absolute apathy,” says Zhenya. “I realized that I had stopped singing for myself, but singing has always been a means of natural self-expression for me. It was a horrible feeling, as if I had lost part myself. Perhaps it was because I tried to make music not for myself, but for someone else, and my music became less sincere. I was looking too much at other musicians. I felt that I had had some stupid jealousy that seeped into me like poison. Awareness of this problem prompted me to break the deadlock.”

Inspired by the British magazine The Gentlewoman, Zhenya wanted her blog to have a title without a strong gender and feminist subtext. “It's not a purely feminist magazine,” she says. “My blog is about people and music, with a particular focus. I came up with the name 'Parallel' when I was looking through a geometry textbook. I liked the implications of the word – many things in our lives are moving in parallel, and if you draw two horizontal parallel lines, it's a sign of equality.”

“'Parallel' for me is a pure experiment,” says Zhenya. “It's research project. There is a common stereotype, for example, that there is no good music in Russia, or that girls cannot be talented musicians.  I want my magazine to destroy these stereotypes. This is my personal challenge – I'm not so extroverted – so it's very interesting. I look for female musicians online, and I ask people where they live. When I find them, I try to interview them on Skype. I am not focused in only one music style, I'm interested in rock, punk, electronic, soul, and modern classical.”

“My blog is not about girls being able press the same buttons as the boys,” explains Zhenya. “Its mission is to instill confidence in one's own abilities, to believe in oneself – this is the most important thing. You get inspired by someone and begin to believe in yourself. After all, perhaps due to the school system, there are stereotypes that have been imposed on people since childhood – what you can and cannot do. Consequently, this gives rise to an identity crisis at some point, because one is merely existing and not living one's own genuine life. I want to try to help change this in my own small way. My blog tries to explain how to be happy in your own skin, to be yourself. "

"I find it interesting to research where the music made by women is concentrated, who walks this path and how, to understand what kind of music we have in the region,” she says. “I started to compile a list of female musicians from various parts of Russia and the former Soviet Union. Now many people have Internet access, there is a lot of information, and it is interesting to examine what role models inspire women to create music. Is there a Russian role model inspiring music-making and concert promotion?”

Zhenya's blog currently has articles on 20 female musicians and she is searching for new talents. Moscow based electronic producer Ishome currently tops the list of successful young female musician role models: “When I published a video interview in the 'In the studio' section with Ishome – her name is Mira – it got a lot of feedback, as she has thousands of followers and fans, though she's an underground musician.”

By the moment Parallel's readership is about 600 people on Facebook and 300 in the Russian social network VKontakte. “I have yet to learn how to promote it,” Zhenya says. “Especially in VKontakte, since in most of Russia, the youth audience is mainly on VKontakte. And I also would like to see my project evolve into a music festival. It does not have to be a female-only festival – again, this is not an aggressive feminist project. And, of course, I would like to find some financial support for all these projects.”

Zhenya was recently at a music conference in Berlin, with lots of different people from around the world united by their interest in music. “It was a very inspiring atmosphere,” she recalls “I started to want to do something new. The people there were willing to share different ideas. I feel that in Moscow, unfortunately, there is a communication problem, because very few people there are open to seeking and exchanging ideas. Everybody is afraid someone will steal their idea. And few people in Moscow listen to your idea attentively and with interest. I always remember one interesting example. One girl, who studied with me at the Strelka institute (her name is Adeola Enigbokan), researched social structures in Moscow and made an interesting conclusion. According to her research, in Moscow there are separate groups, islands of scenes that do not want to converge and share ideas and experiences. This was an interesting outside view.”

“Why is Moscow is so closed that it's stewing in its own juices?”, ponders Zhenya. “Russia is not Europe. There are borders and visas, and the rest of the world is not so interested in Russia. There are certain Russian trends in which the West is interested. For example, fashion designer Gosha Rubchinsky's style [laughs]. Moscow is trying to be like someone else, and is losing its own face. It is really not clear whether Moscow has its own face. Or maybe it's a collage of different faces."

Zhenya spent her childhood in Ireland (her parents worked at the Russian embassy in Dublin) and she has lived in the Russian capital since the age of 12. She loves Moscow and has many favorite places in the town: “I like to visit Patriarch's Ponds, where – if we ignore the numerous expensive cars and their wealthy owners – you can feel Moscow's lovely unique atmosphere. I really like Voznesensky Lane, with its Anglican Church, and Malaya Gruzinskaya Street – there is a Catholic cathedral there – they remind me of Dublin, where I spent my childhood. Or, for example, I love Merzlyakovsky Lane – in the summer you can often opera rehearsals from the open windows of the music academy.”

“I would like to live somewhere else for a time to compare my Moscow experiences with other cities,” says Zhenya. “I don't have high hopes about living abroad, I just want new experiences to compare them with Moscow. Maybe it can be a new sourse of inspiration for me.” 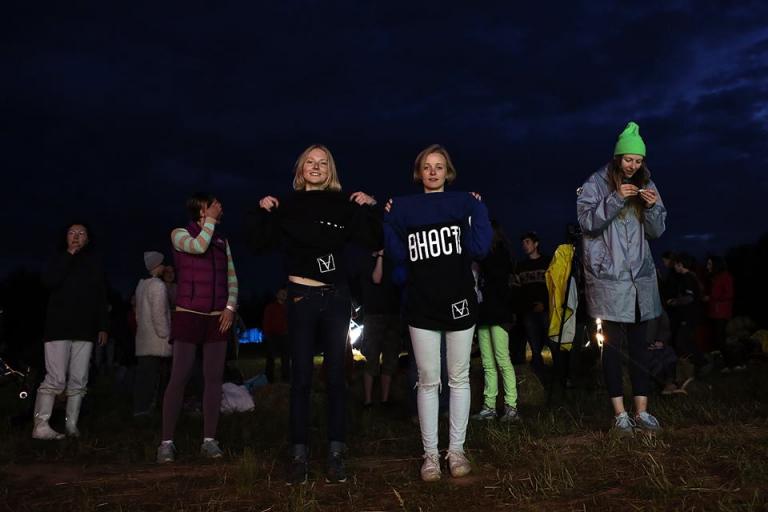