Borderland case: Who makes a new culture in the German city of Görlitz

Divided by the river, the German city of Görlitz and the Polish city of Zgorzelec live as if together and at the same time apart. We talked with the youth Görlitz to feel the inner life of this place.

At first glance, Görlitz seems like an ordinary provincial city that has remained apart from the big story. In winter, the streets of  Germany's easternmost city, where fifty-six thousand people live, are deserted and melancholy. That’s why many filmmakers who were looking for the atmosphere of Central Europe at the beginning of the 20th century have chosen this city to shoot their films (yes, it was here that the film «The Grand Budapest Hotel» by Wes Anderson was shot).

But it's worth sitting in a local pub and chatting with the youth of this city to feel the inner life of this place.

Like the fictional state of Zubrowka in Anderson’s movie, Görlitz has been ruled by many kingdoms and empires. At various times it belonged to the kingdoms of Poland, Bohemia, Saxony, and Prussia. After World War II, the world powers annexed the eastern part of Germany to Communist Poland, and the border went right along the river, which divides the city into two parts.

The city has several museums and a theatre, but it has gained fame as a place where many films were made. It was not bombed during the war, and the old streets and palaces have attracted many directors, including Quentin Tarantino and Wes Anderson. 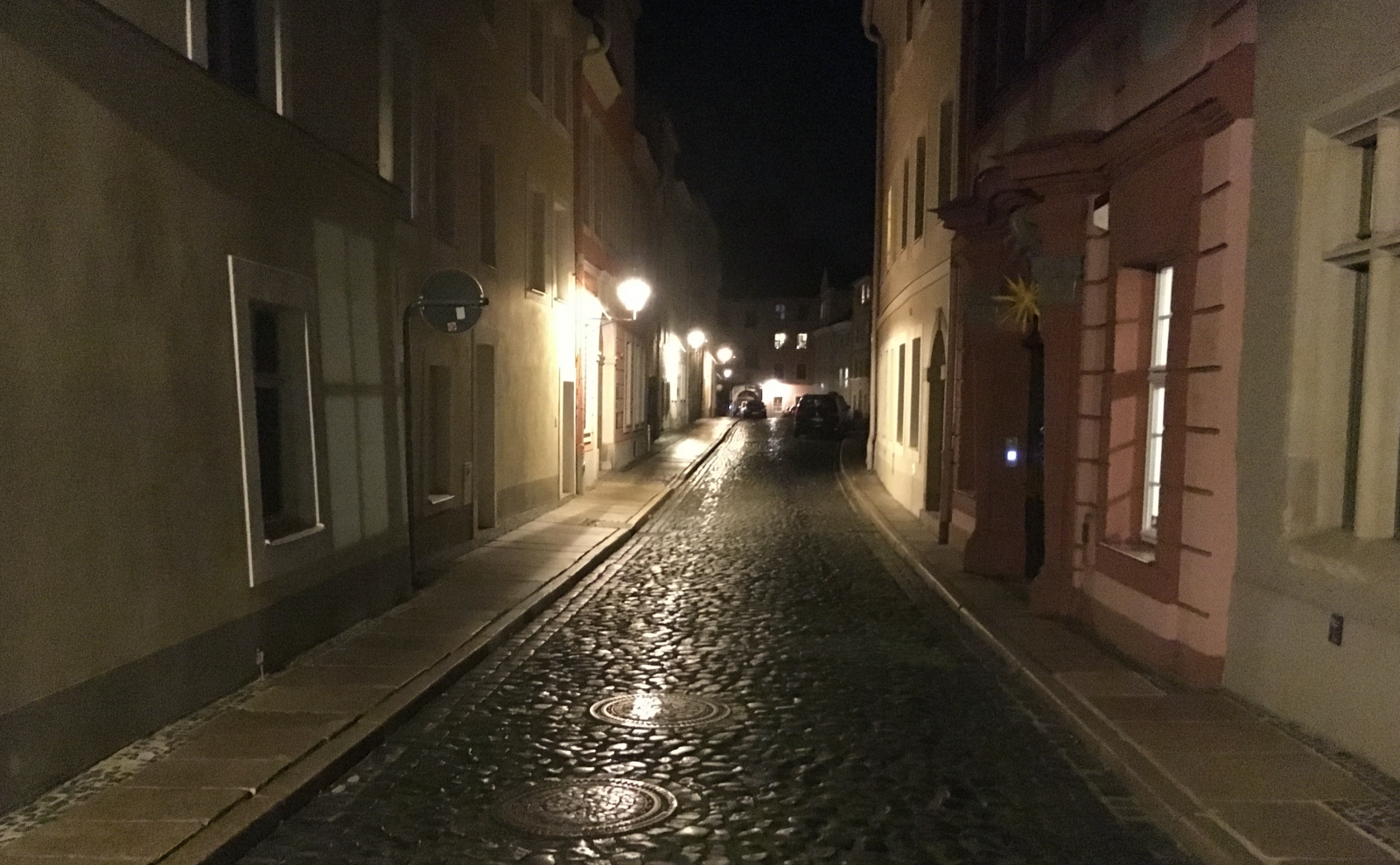 In the Communist era, the city was known for having one of the largest factories that produced railway wagon cars. The city met the unification of two Germanies in a condition of decline and neglect. Since then, hundreds of homes have been restored - from 1995 to 2016, one anonymous donor has provided over 10 million Euros. Now the city contrasts wildly with its Polish neighbor, Zgorzelec, where desolation still lingers. 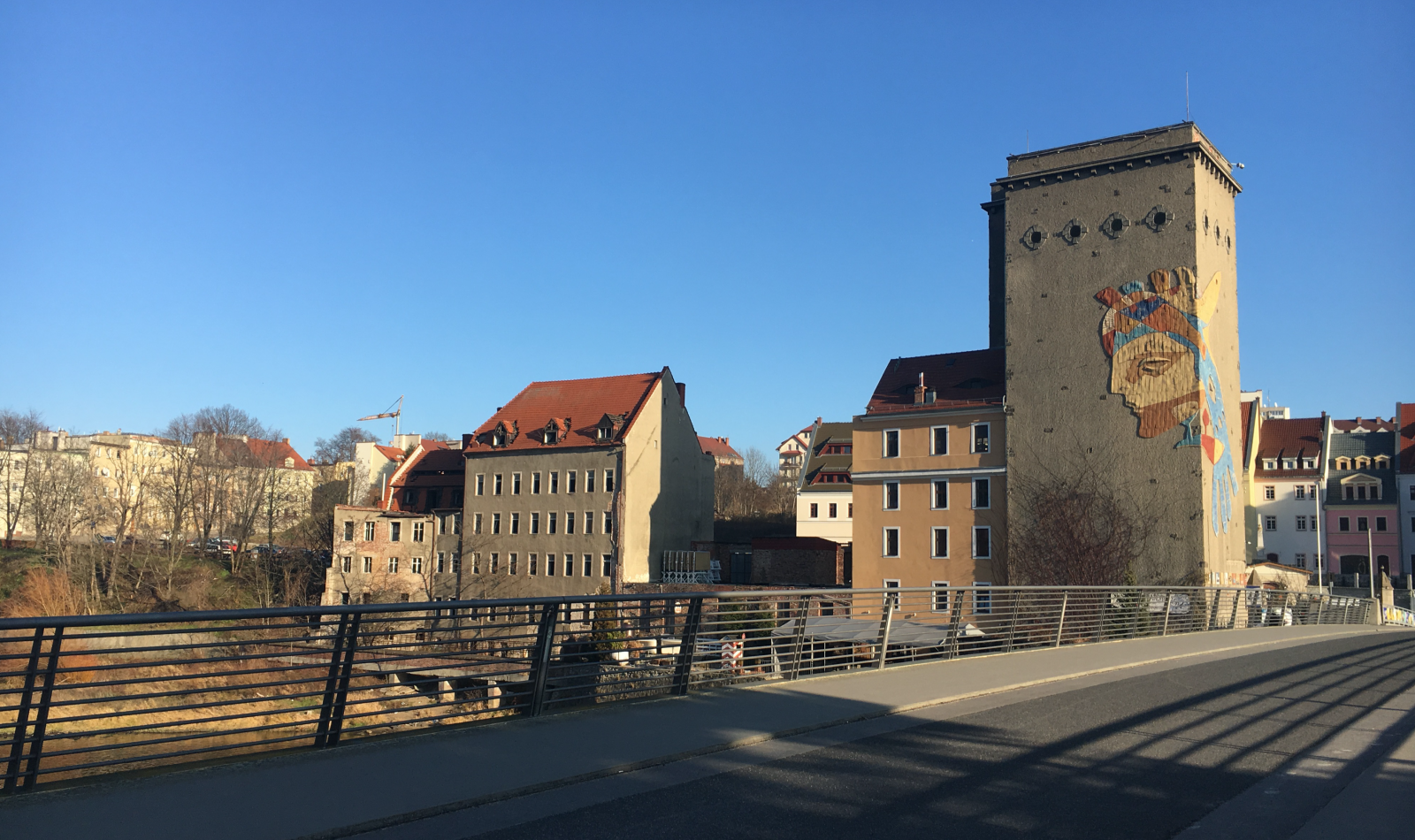 The two cities live as if together and at the same time apart. Using the bridge, you can cross the border in 3 minutes, and many Poles live and work in the city.

“We don’t have much communication with Polish artists or cultural communities, unfortunately. And it's a pity, I think that it would be very useful for them,” Felix Schuster told us. Felix is one of the organizers of Zukunftsvisionen festival of contemporary art, which takes place every summer in Görlitz. Usually, the festival takes place in abandoned buildings and sites and attracts up to two thousand spectators. 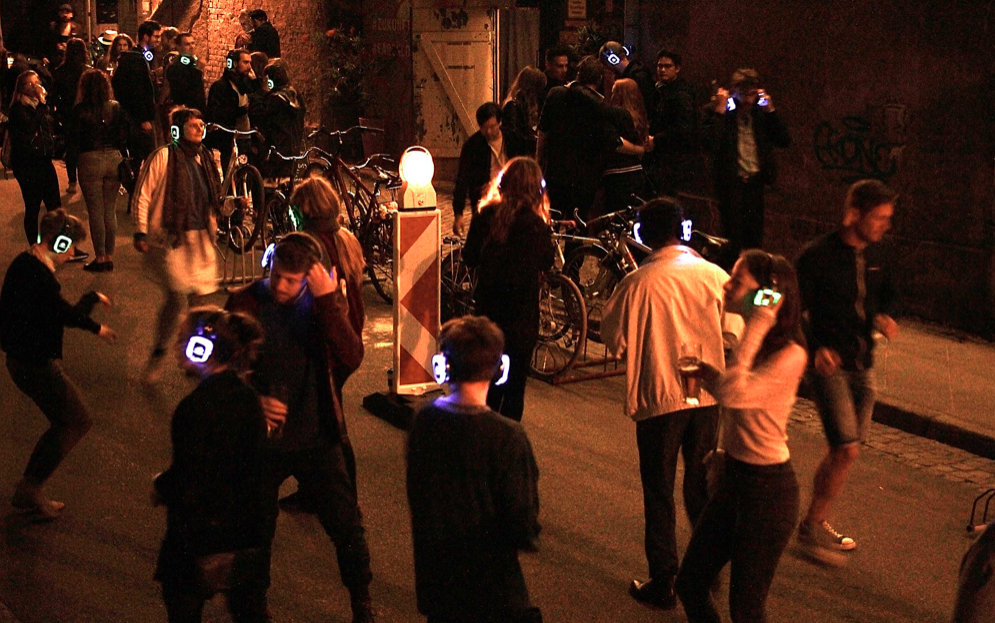 Like many cultural and social initiatives, the festival grew out of the local community RABRYKA. This local community was created in the early 2000s by several young people who came to Görlitz from Dresden. The city already had several museums and a theatre, but they wanted to help the cultural life appeal to the young residents of the city. They rented an abandoned factory, which was useless to anyone, and created in it a social and cultural center for local youth.

RABRYKA center hosts a variety of workshops, parties, concerts and an annual festival. Now in the city there are already several local communities and placemaking projects. They do not compete with each other, but cooperate and share equipment and resources. 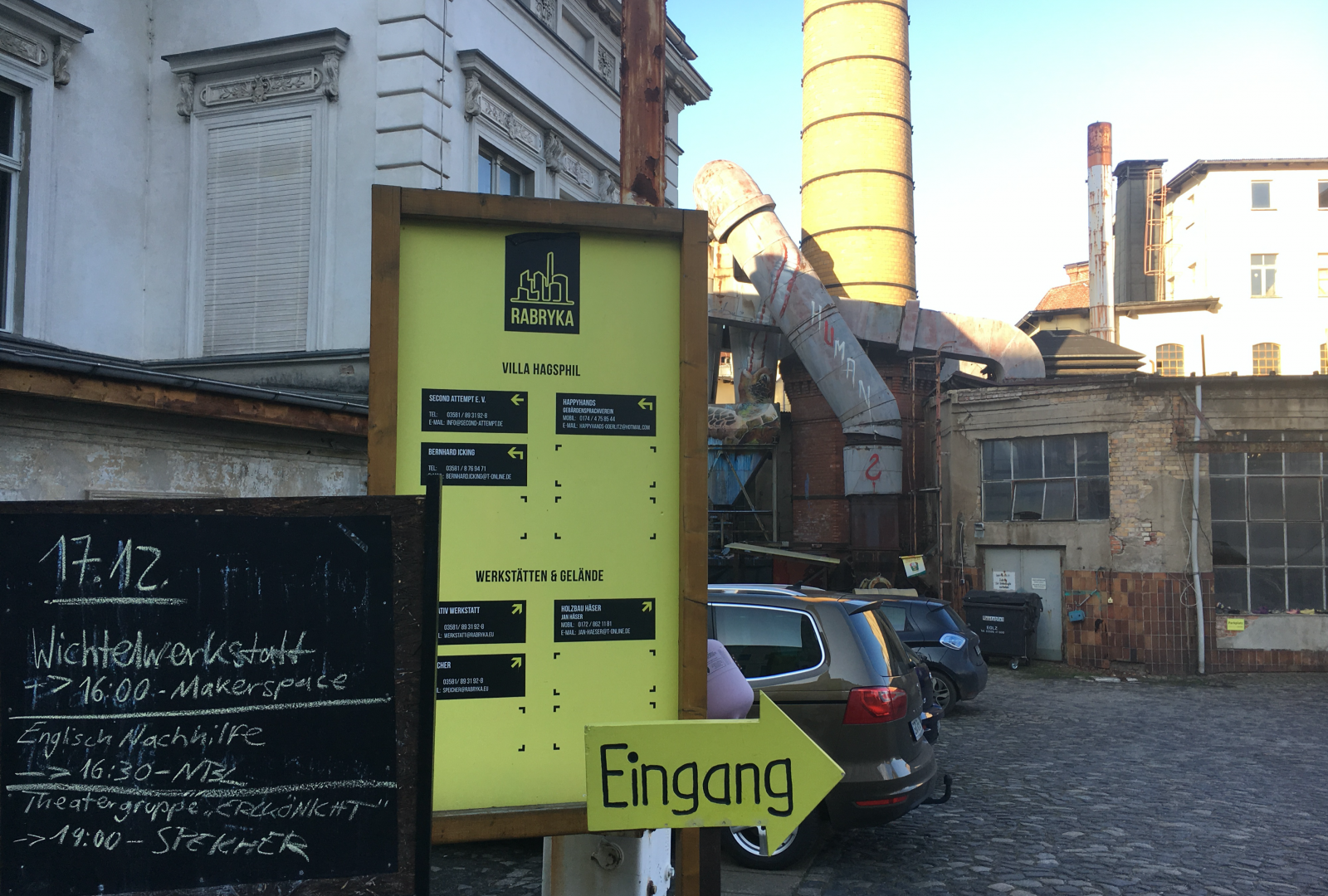 "Our ideology is that we do not receive money from commercial companies. We exist on European grants and support from the regional government», says Dar Ronge, one of the members of RABRYKA team. For several years, 2-3 generations of activists have already changed  RABRYKA, and they have been able to implement a lot of initiatives. RABRYKA is a kind of incubator: any local social project can come to it and ask for a space and financial support. Thus, a recording studio was opened on the territory of the factory, and a community garden and a workshop were made, where any local can make something from wood and used materials. 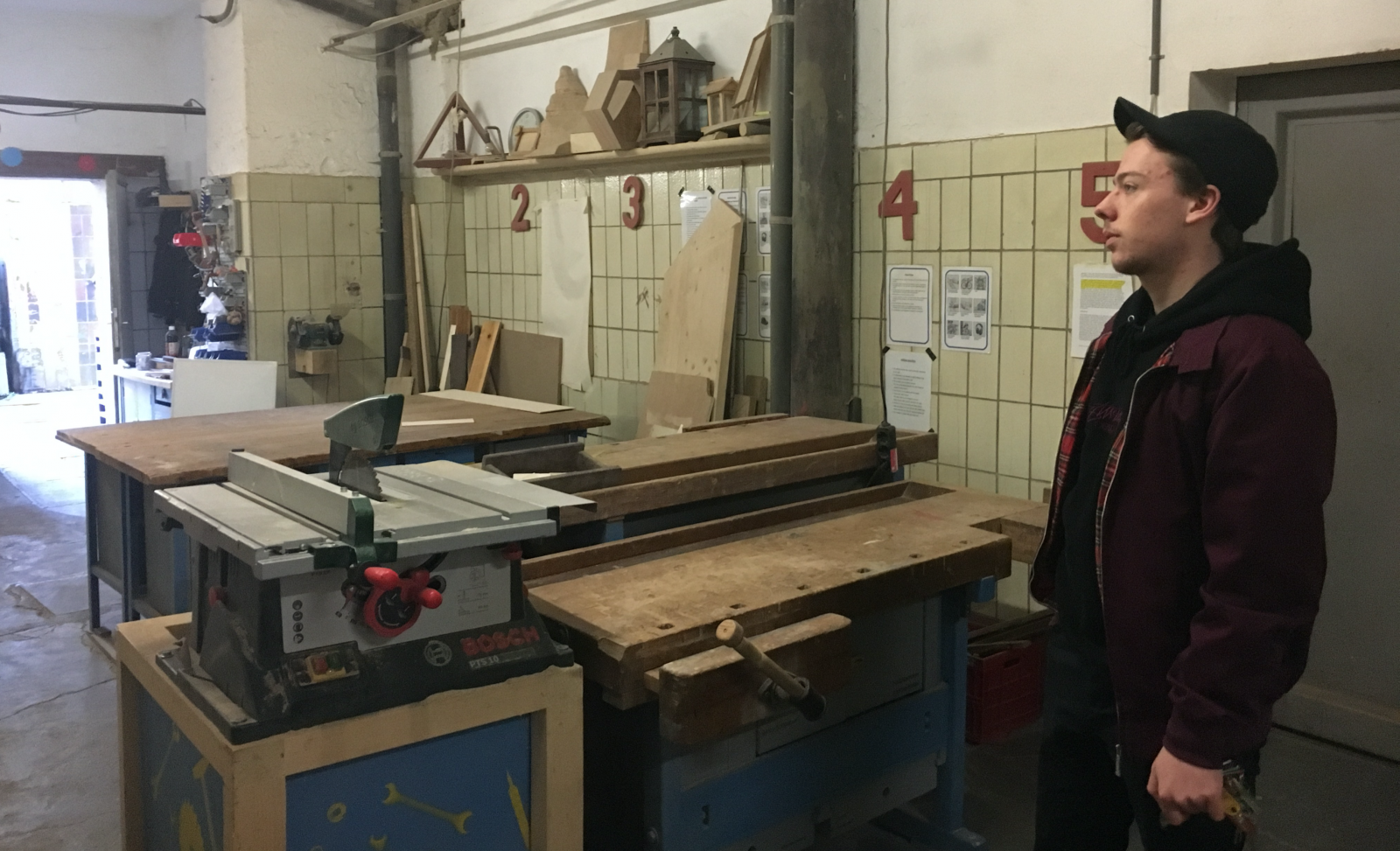 In 2013, RABRYKA initiated a flash mob to draw the attention of local authorities to the fact that there was no cultural infrastructure for young people in the city. About 200 people stood outside the city hall with their mouths sealed with tape. City Hall responded well to this message and repaired one of the buildings where the train factory used to be located. RABRYKA won the competition for the right to be installed in this building and will move to it in the spring. 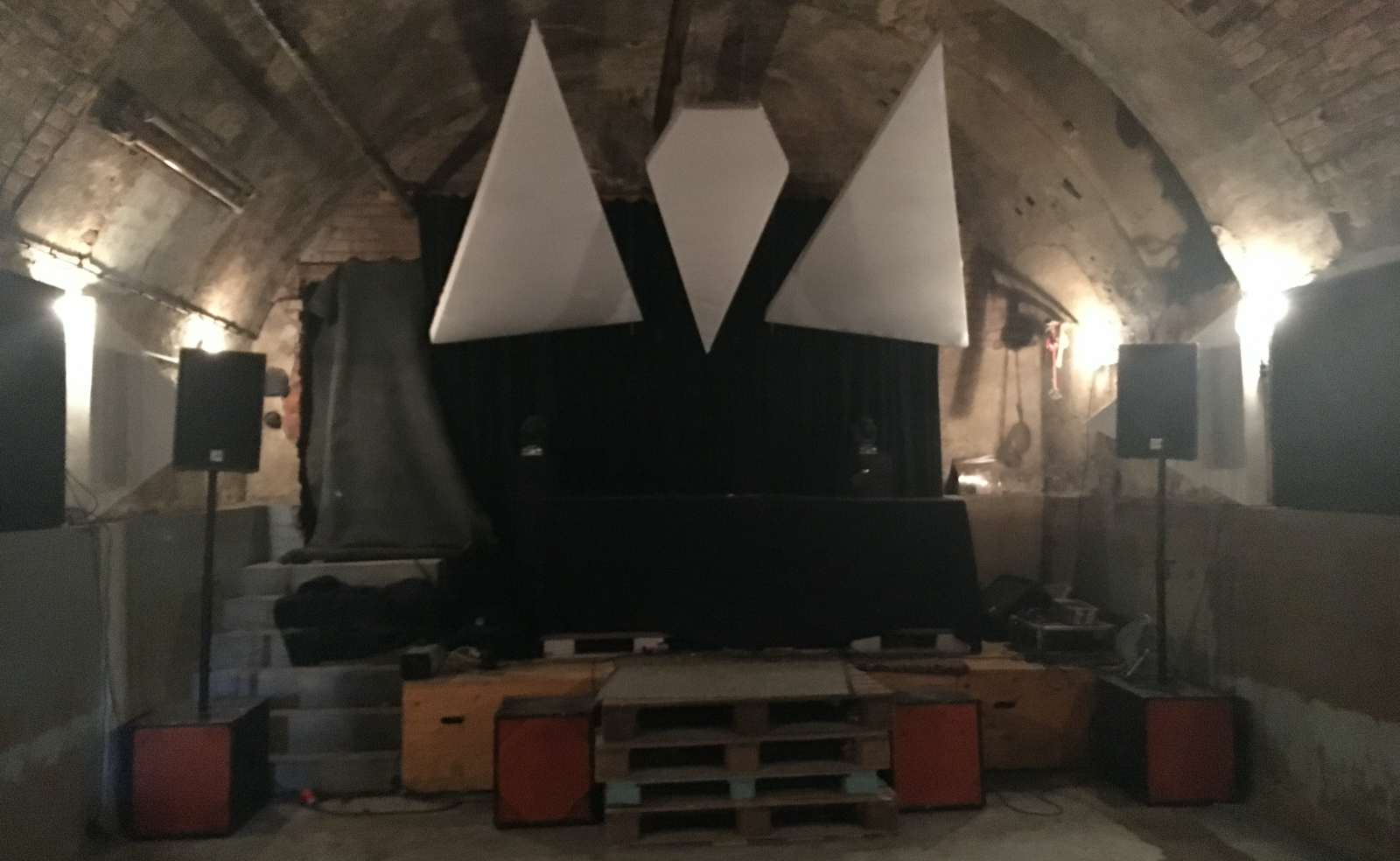 RABRYKA provides its music venue to local young people for concerts and parties. 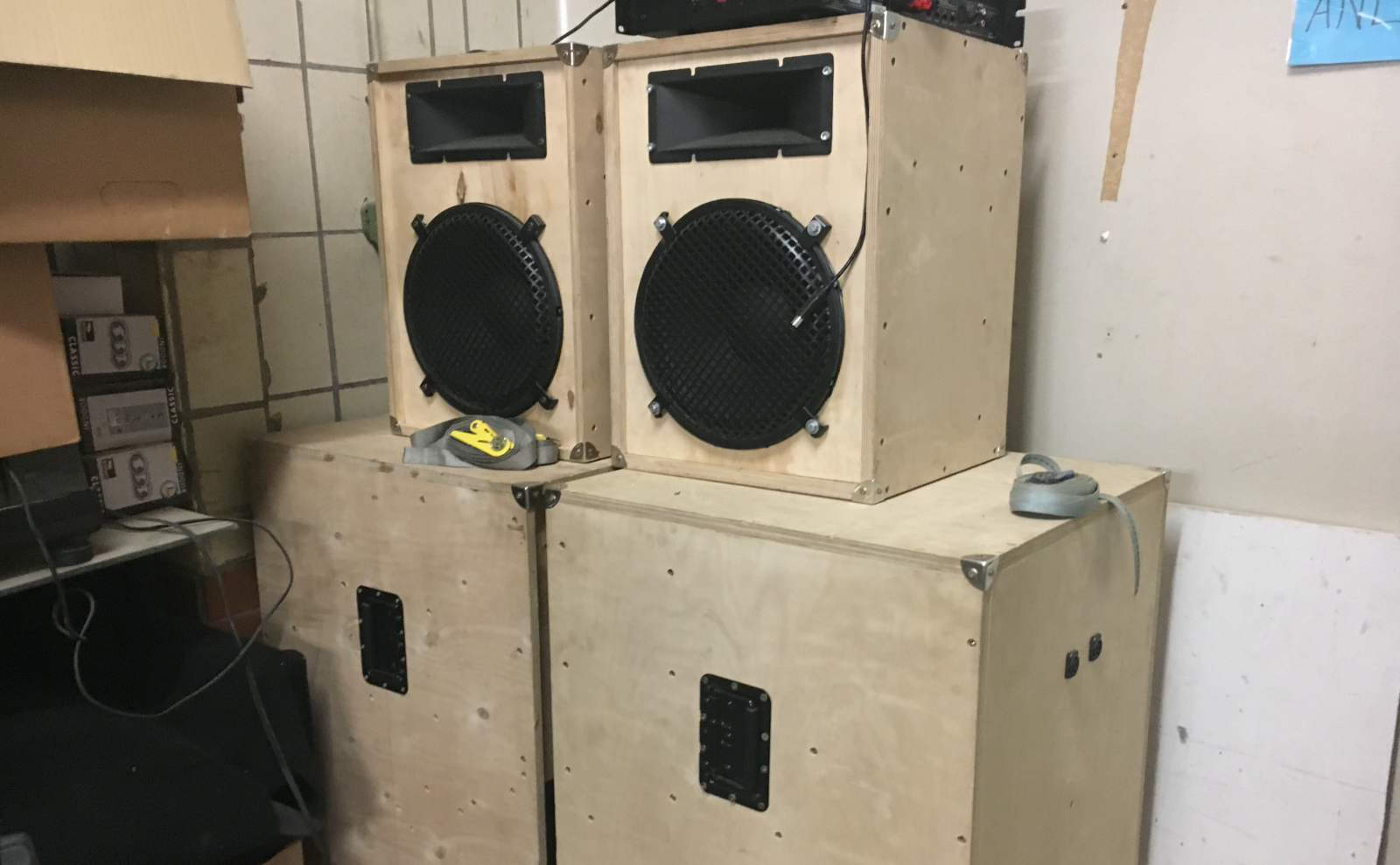 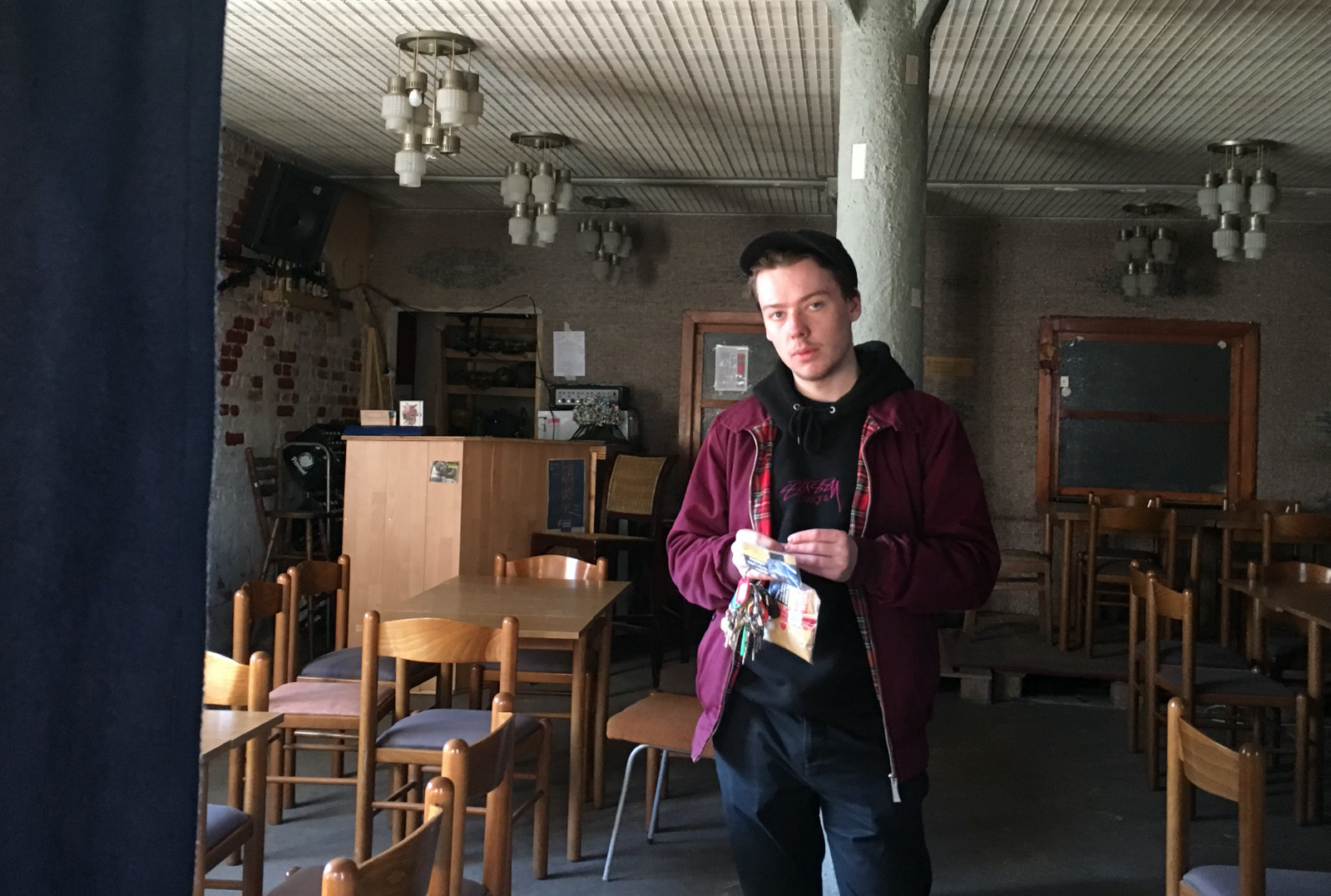 Soviet retro style. Dar Ronge standing in the former canteen of the factory, which RABRYKA members turned into a club for parties and events. 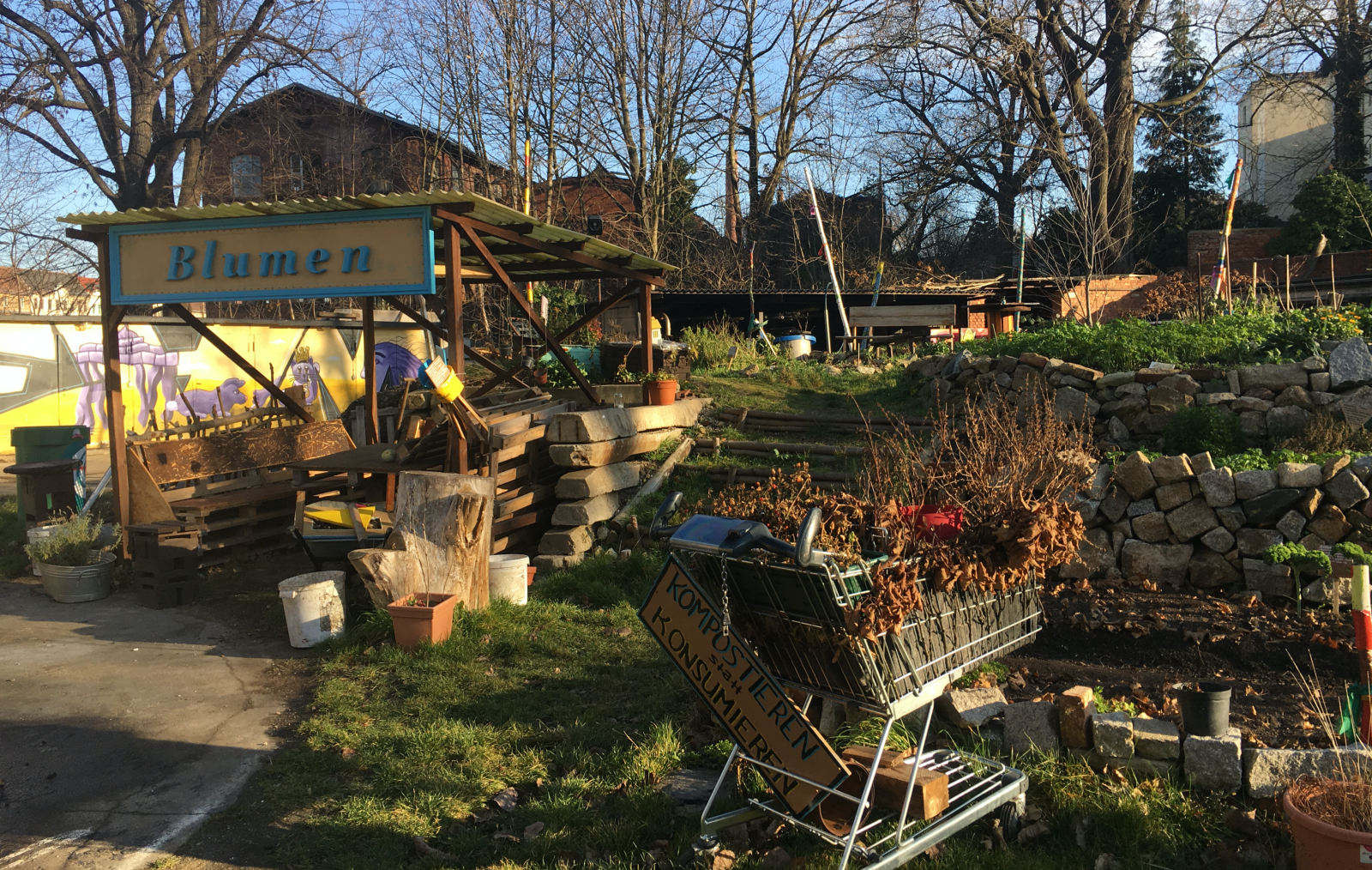 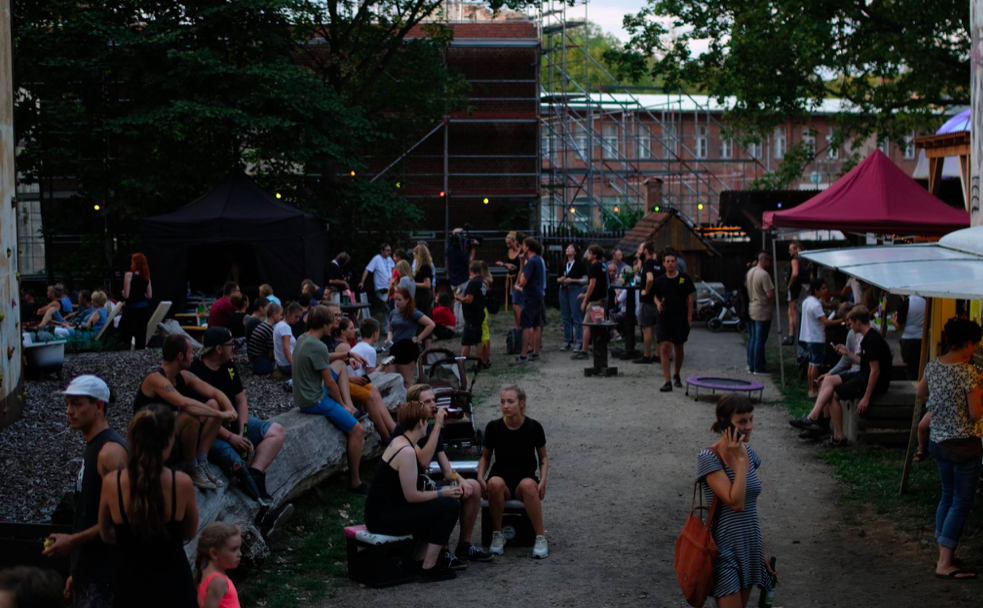 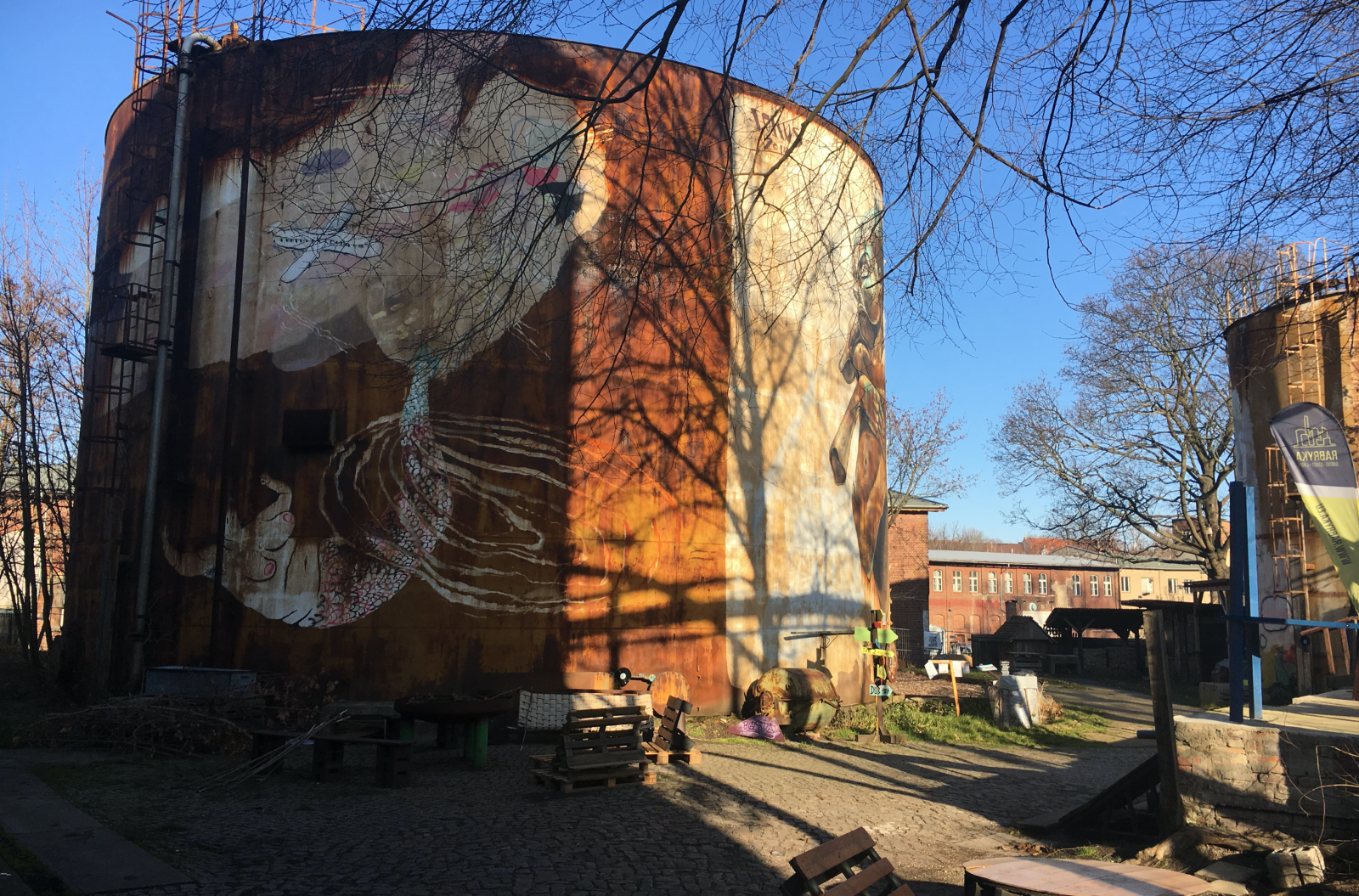 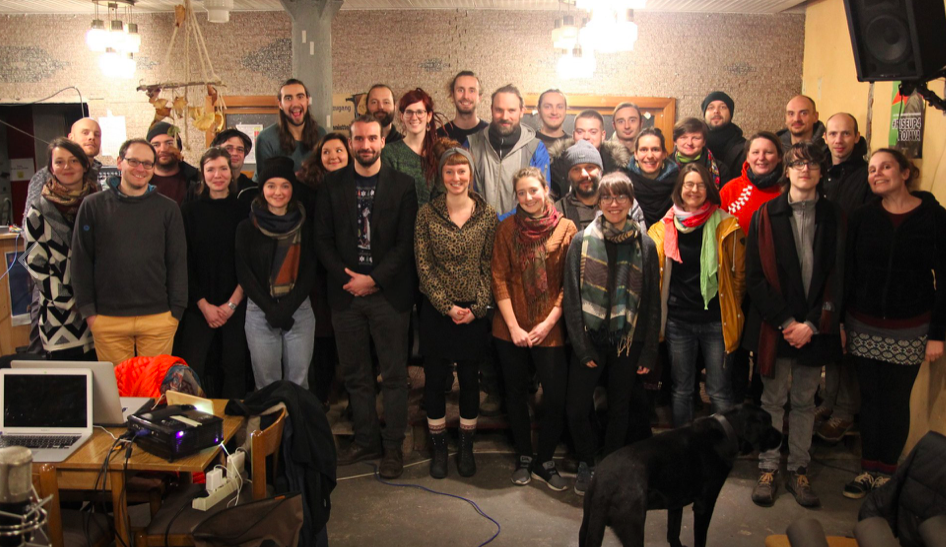 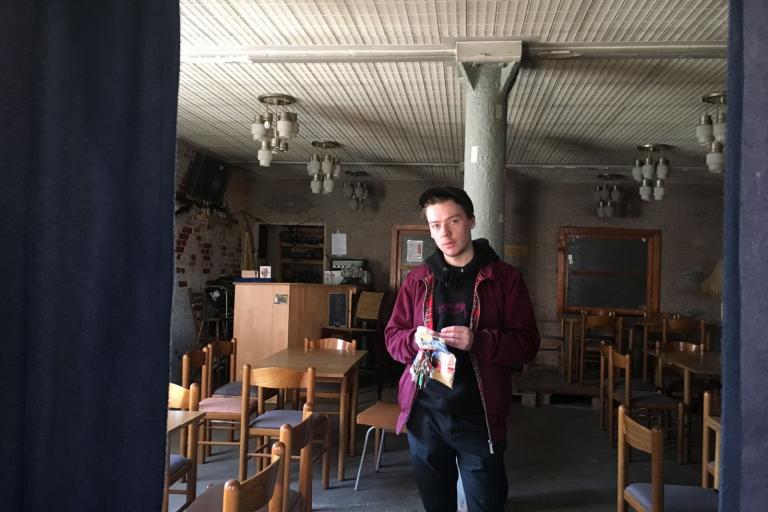